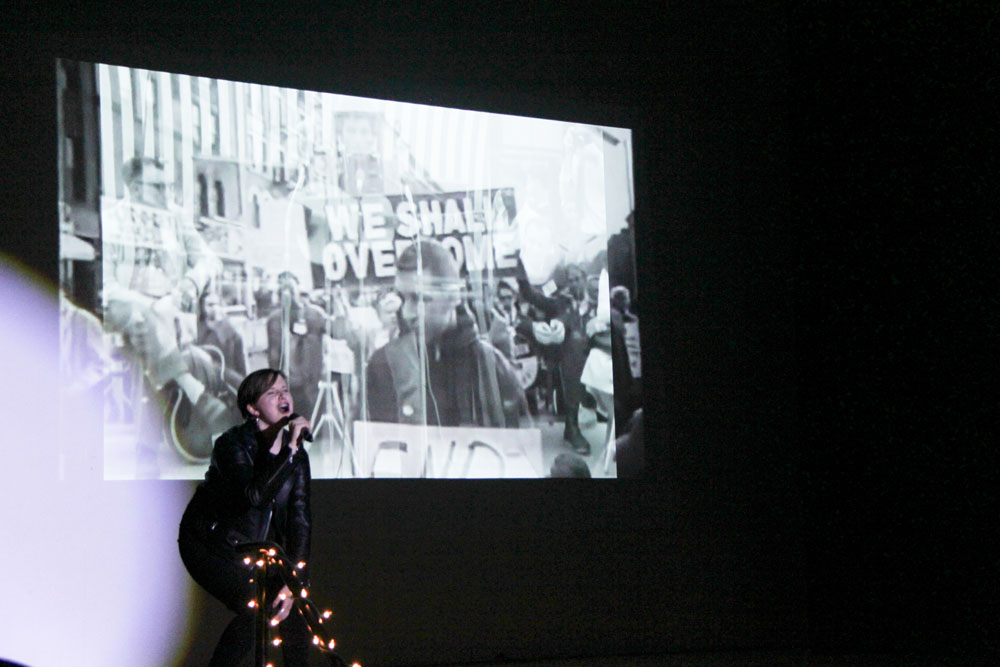 This year’s Red Carpet-themed Spring Café inspired our “Grammys Showcase,” an unforgettable evening of music from the 60s, 70s, 80s and 90s. 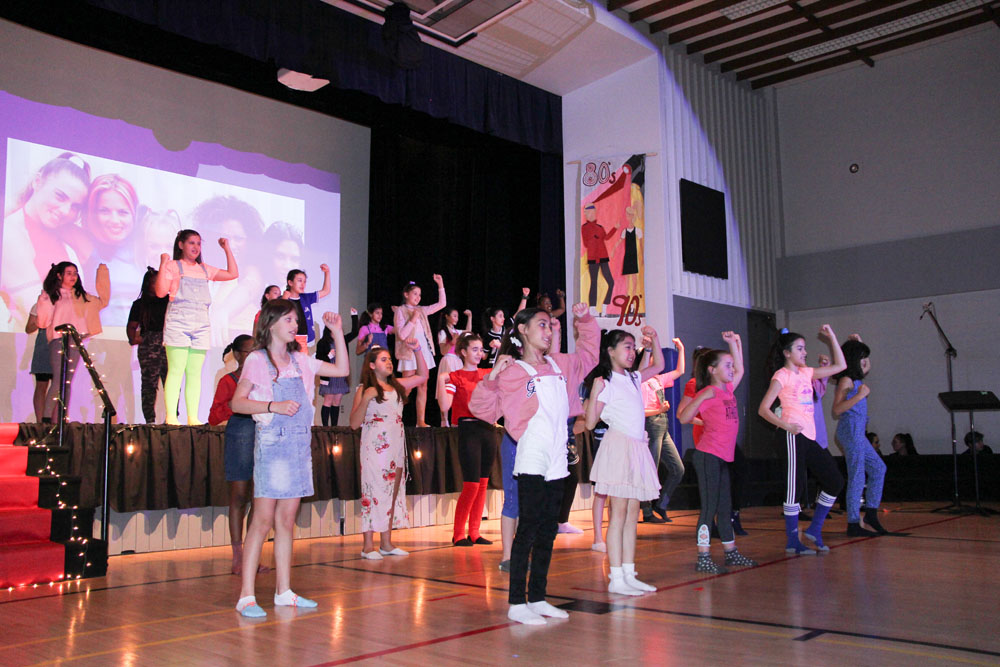 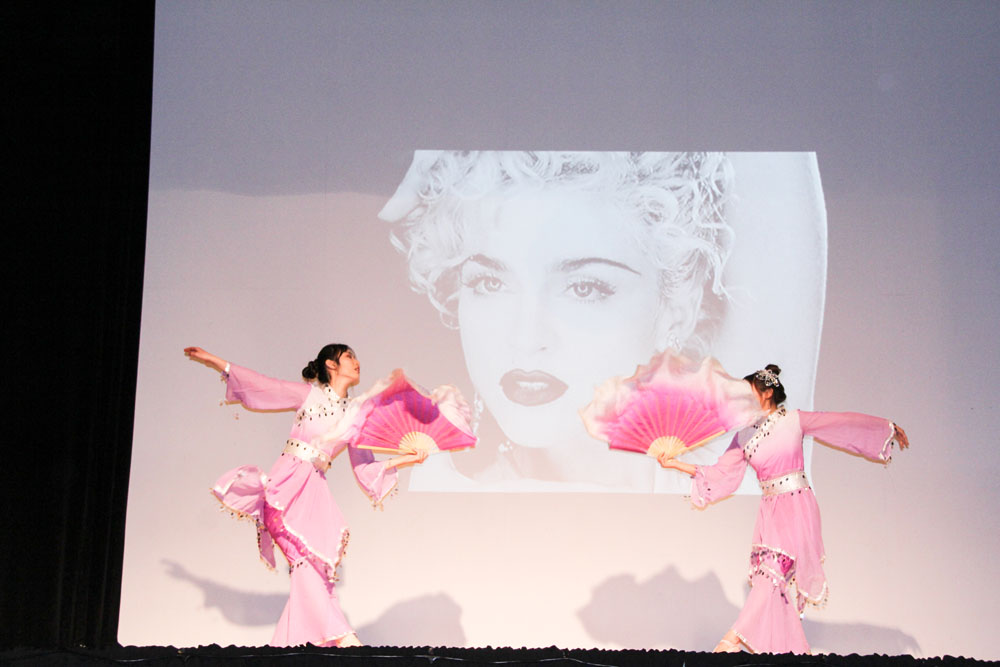 The senior drama class embodied and brought to the stage some of the greatest musical icons to introduce the acts from each decade, including Lady Gaga, The Supremes, Cyndi Lauper, Madonna, MC Hammer and the Spice Girls. They all walked the red carpet with the flashing lights of paparazzi to the Senior Choir’s performance of Lady Gaga’s “Paparazzi.”

The songs of the 1960s were introduced by “The Supremes” and began with a moving performance of Elvis’ “Can’t Help Falling in Love” while black and white images of Elvis and Priscilla Presley played in the background. The liturgical choir’s soulful cover of “Stand By Me” highlighted the strength we experience when God stands with us. The Robotics Team made their musical debut with their vibrant performance of The Dixie Cup’s “Iko Iko.” The team-built robot kept in time with cymbals and lit up the stage while it danced to the acapella performance. The decade came to a close with the solo and group performances of ever-popular hits from the 60s “House of the Rising Sun” and “California Dreamin.” 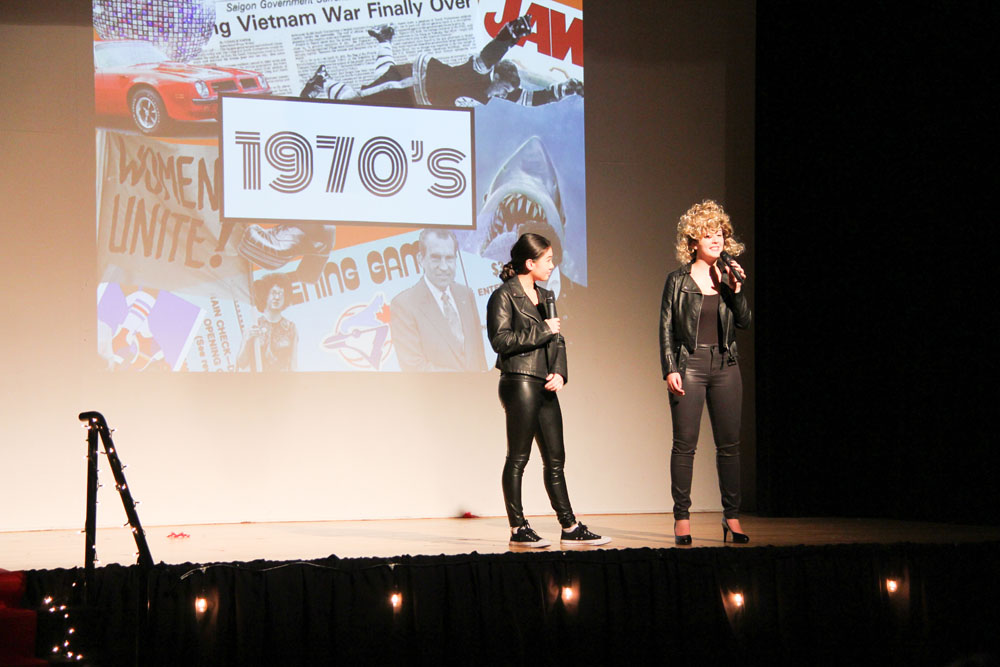 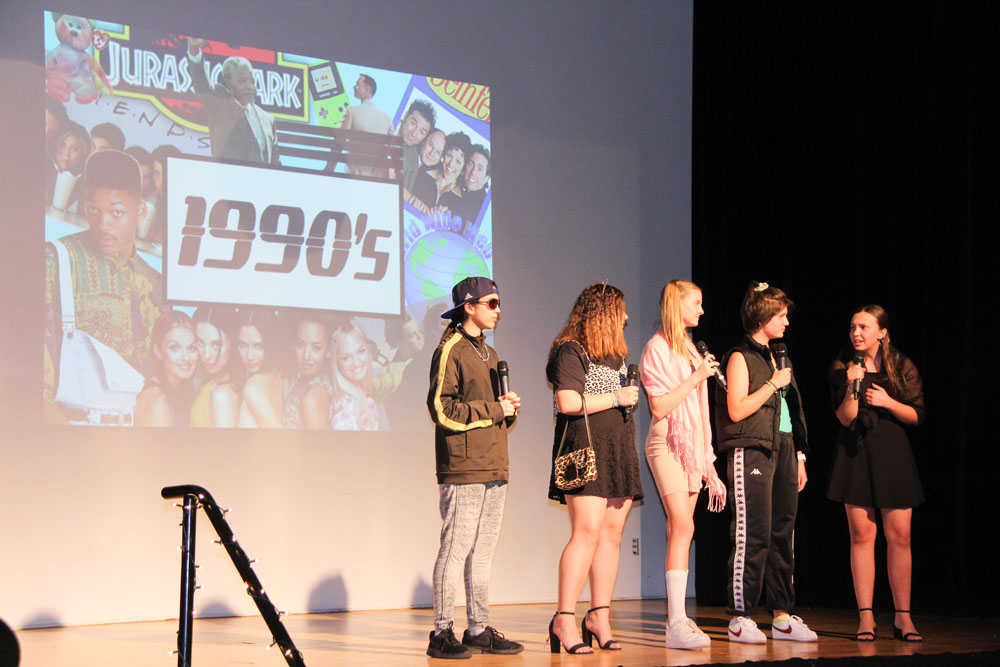 Next was the 1970s—and it was groovy! Hosted by “John Travolta” and Grease co-star “Olivia Newton-John”, they reminisced about the sounds, fashion and dance moves of the decade. The disco ball was turning and the stage came to life with a soulful performance of “I Will Survive,” followed by a contemporary dance to Elton John’s “Your Song.” The middle school band added a bit of funk to the act with “Play that Funky Music,” before ending the decade with the audience jiving in their seats to the sounds of ABBA.

“Madonna” and “Cyndi Lauper” graced the stage with their big hair and bright colours to introduce the sights, sounds and music of the 1980s. The Ukulele Club and Senior Music Ensemble opened up the decade with a unique and percussive arrangement of the ever-popular melody of Aha’s “Take on Me.” This creative act was followed by a tender performance of U2’s hit “With or Without You” before the grade 7 and 8 students stormed the stage to sing and dance to New Kids on the Block’s “The Right Stuff.” The dancing continued with the dance team’s performance to Whitney Houston’s “I Wanna Dance with Somebody.” The decade came to a close with the senior choir’s heart-swelling performance of Cyndi Lauper’s iconic 80s love song “Time After Time.” 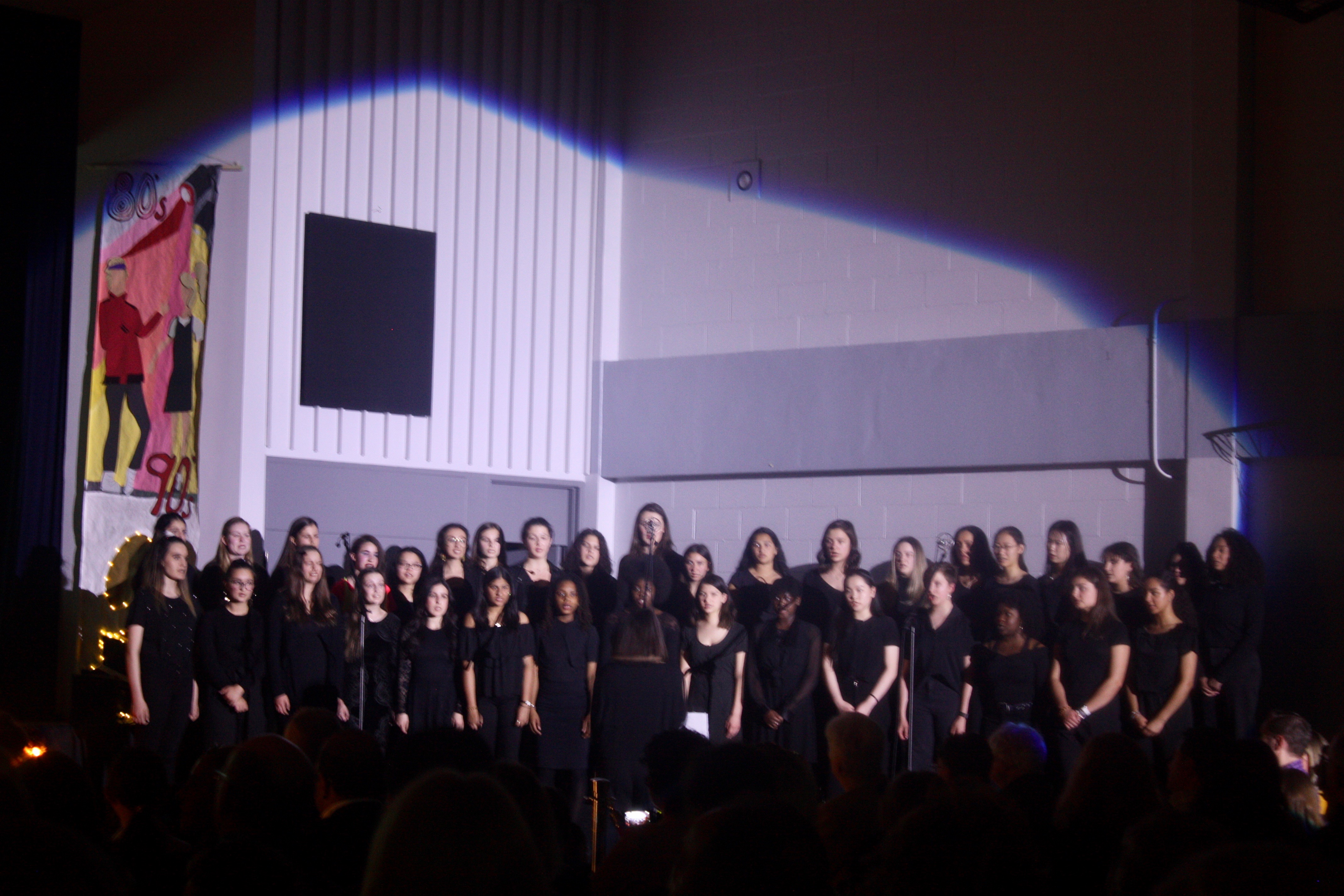 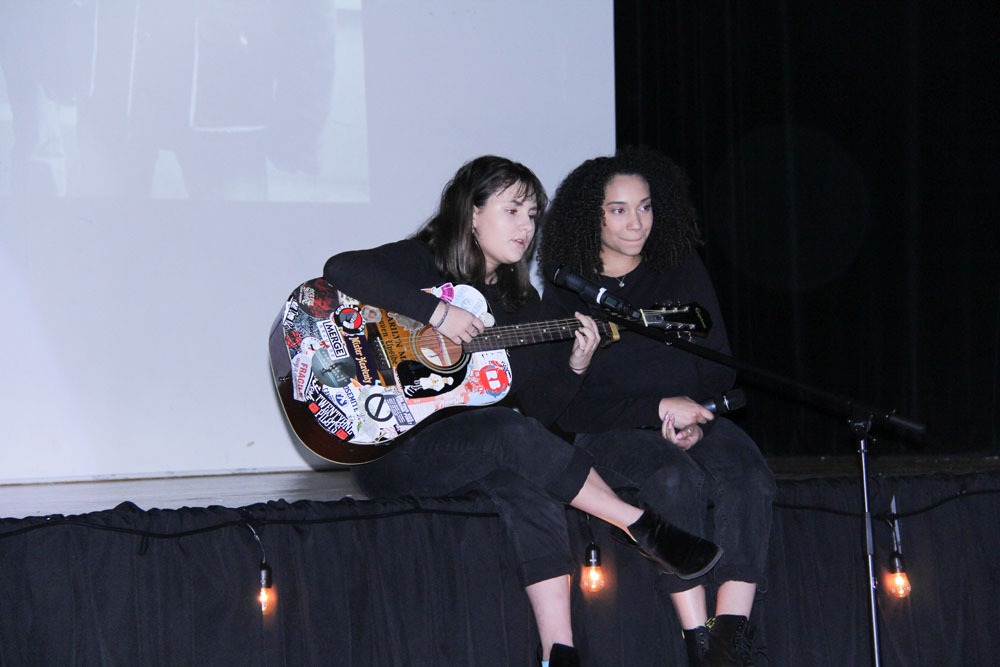 The final decade of the evening was introduced by “MC Hammer” and the “Spice Girls”. It started with the intermediate choir’s “I Want It That Way,” followed by a beautiful cross-cultural performance that fused traditional Chinese music and dancing with Madonna’s “Vogue”. These girls brought new meaning to “Striking a Pose.”

This act was followed by a memorable, acoustic duet of Oasis’ “Wonderwall,” before the middle school choir “Spiced up our Lives” with the Spice Girls! The show’s final number brought everyone back on stage for an unforgettable performance of Queen’s iconic “Bohemian Rhapsody.”

A very special thank you to HNMCS Arts Prefect, Emmy Lebed '19, who played a significant role in this year's show. As her IT project, her contributions spanned creating promotional posters and announcements to preparing all of the backdrops and videos for each of the acts. She worked tirelessly behind the scenes and played an important role backstage during the show. Emmy is also a valued member of the senior and Liturgical choirs. Thank you and you will be missed next year! Wishing you all the best in your future endeavors.

Thank you also to alumna Alexandra Fernandes '17 for returning to HNMCS to share her percussive talents throughout the evening and to all of the performers and staff whose talent and hard work made the evening a huge success.

The evening was also special because it hosted and introduced our incoming Head of School, Carrie Hughes-Grant, to our school community. She received a warm welcome from everyone before delivering her heartfelt closing remarks.

The show brought our community together for an unforgettable night to bask in sounds and memories of some of music’s greatest hits. Thank you for creating new musical memories with us. 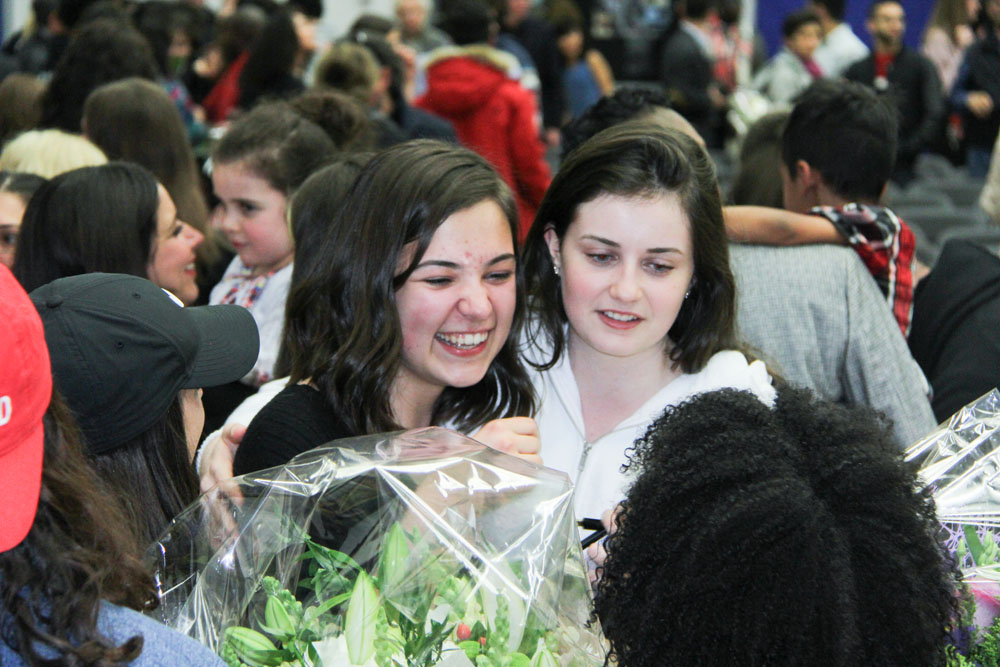